Would you like to start the day with a happy leadership thought?

We are all alone, born alone, die alone, and—in spite of True Romance magazines—we shall all someday look back on our lives and see that, in spite of our company, we were alone the whole way. I do not say lonely—at least, not all the time—but essentially, and finally, alone.

Hunter is just one in a long string of cynics who probably needed better friends… and a hug. Personally I’m a little more optimistic about our potential for connection in leadership than espoused in the above quote.

Modern neuroscience has come a long way in understanding the functioning of our brain and, even though many mysteries remain, we now have a better idea of what might be going on in that fatty blob of matter which allows us to understand each other.

This is not just a passing interest of course. Being able to understand people, and in particular people’s emotions, is an important element of creating motivated followers and leading them effectively.

My research, along with other recent studies, clearly shows that emotional intelligence is the sine qua non of leadership. Without it, a person can have the best training in the world, an incisive, analytical mind, and an endless supply of smart ideas, but he still won’t make a great leader.

Wait a minute! What about people like Steve Jobs or Elon Musk? They are not exactly known for their understanding personality!

Well… touché… there certainly are more elements to effective leadership (we take a more in depth look in our Leadership Course), I would also point out that understanding people and caring for their opinion are quite separate. Reading other people’s emotions is only one piece of Emotional Intelligence.

How DO we read people’s emotions?

(Just a heads up that what follows is quite an exciting journey in our understanding of emotional expression as well as the functioning of the brain. However, all the cool examples do take time so if you don’t have much time to geek-out I’ve included a ‘Summary of Concepts’ toward the end of part three of this blog where you can get some actionable tips. Enjoy!)

We are not that special

Let’s start by taking ourselves off a pedestal, most mammals display and read their own species’ emotions. Some animals that have spent enough time around humans read our emotions as well as their own.

What about the animals?

Primates are an obvious example but horses show some rudimentary understanding too, as do dogs and cats. In fact dogs are so good at picking up our subconscious cues that it becomes… a bit of a roadblock to effective security.

Several studies have shown drug-sniffer dogs are highly inaccurate because they are often influenced by the bias of their owner and follow that rather than their nose (thankfully, it’s not as big of an issue with explosive-sniffers, possibly because their owners have a much bigger stake in getting it right).

Next time you have one of those puppies taking a whiff of your belongings you could rightly wonder if it’s the person on the other side of the leash that’s being nosy.

If animals can do it, we can safely* remove words as a necessary factor then (*dogs do distinguish words and pitch).

What could be more essential?

This will come as no surprise, especially since ‘surprise’ seems to be a universal expression.

Decades of research suggests that there are in fact universal expressions for seven emotions: anger, contempt, disgust, fear, joy, sadness, and surprise. While there are important variations between cultures (particularly in what parts of the face are most expressive), the results have been replicated hundreds of times across the globe.

You can test your ability to read expressions here.

It makes sense that something so widespread would therefore have a genetic component. We notice the ingrained nature of our expressions in the faces of new-borns who have not had any time to learn. The same expressions are common even for people who were blind from birth and could not have seen such expressions before.

Great so, some expressions are universal, we learn what they mean over time. It all seems fairly simple so far, but… from here on things get more complicated.

For starters, here is an example where your abilities will break down. Look at Michelle below and see how her expression changes when you look at her upside-down

(WARNING, maybe try this when no one is looking at you). 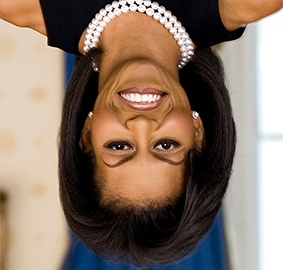 We are still figuring out the mechanics of facial recognition but, so far, one of the theories suggests the following: we have a general template of what an average face looks like, and our brain makes judgements based on the proportional distances between key features like the distance between eyes, mouth and nose. In addition each element is processed individually i.e. we see the eyes and the mouth separately, not all at once.

Both eyes and mouth look happy.

It is only when you look at the picture upside down that you notice the unnatural features, and how the emotion changes drastically.

We also use… everything else

While the face is usually the most reliable source of information the rest of the body can give a lot of clues too. Changes in pitch, body posture, and (maybe) even smell can help us gather clues on someone’s internal state.

You might have observed or experienced this yourself where someone has a perfect poker face but… then their leg starts going, or there’s a twitch of the fingers. As a long time dancer I can testify that you can pick up on a lot of subtle emotions even through minimal contact with your dancing partner.

The difficulty with these other modes of evidence gathering is that they are even more context dependent than facial expressions.

Ultimately we have to take a lot of things into consideration, both in the past and present.

It takes time and experience to learn what the ‘scales of emotional expression’ look like for each individual we deal with (see Influencing & Communication course for more on improving the effectiveness of your communication).

I have had several colleagues whose resting face made me wonder why they were so angry all the time… and yet had to learn that’s what they looked like when ‘content’ or ‘concentrated’.

We are still missing something

Simply saying that we ‘read’ facial expression or body position doesn’t tell us much about the mechanisms that grant us this skill in the first place. It is akin to saying we can understand a book because we can ‘read’ the words, without mentioning the elements that are essential to that ability (i.e. eyes/hands, a brain that can learn, past experience etc.).

In fact I would go as far as saying that you do not ‘see’ with your eyes.

In fact, you ‘see’ with your brain!

Of course, when it comes to Leadership being able to see clearly with your brain is a skill worth honing…

To find out more read part two of this blog…

Matteo has travelled widely and has a truly international background. As a scientist, teacher and coach his creativity and enthusiasm is invaluable to clients and colleagues throughout Europe.