Back in the 90s it seemed that not a year went by without a new book exploring the difference between male and female brains.

‘Why Men Lie and Women Cry’

to name but two.

They seemed to claim that men and women are entirely alien species with completely different brains.

Now it seems they got it all wrong. According to a recent headline in the Guardian male and female brains are the same.

But is that what the recent research actually says or is the truth somewhere in between?

I’m always nervous when a pendulum swings and ends up at one extreme or another so I decided to explore this one for myself and see what the scientists actually said.

The media has presented the findings in such a way that without careful reading you might be forgiven for thinking that the research says that there are no discernible gender differences in the brain.

Well, I went and read the research findings in detail and that most certainly isn’t what the authors say and there is no claim in the article that male and female brains are exactly the same – far from it.

So the truth is indeed somewhere in between.

The research was exploring the idea of a sexually dimorphic form of the human brain. That is, that there are two distinct forms of the human brain – one male and one female – and those forms are fully internally consistent.

They found that that isn’t the case – there’s just one form with variations, some that depend on gender and many more that vary between people without respect to gender.

Our study demonstrates that although there are sex/gender differences on brain structure, brains do not fall into two classes, one typical of males and one typical of females.

Let me use an analogy that hopefully might make things a little clearer.

The popular books on gender difference could be interpreted as implying that male brains are as different from female brains as a banana is from an apple. Both are fruit but they are very different.

The headline in the Guardian implies they’re both apples so they’re the same.

The actual research says they’re like different kinds of apples, for example a Braeburn and a Granny Smith. They share an awful lot of the same characteristics, but there are subtle, small differences and a range of possible forms of those characteristics.

Anyone who has ever attended one of my Women in Management courses or Diversity sessions will know that I have always argued that there is a spectrum of gender related behaviours and characteristics that overlap significantly.

And I was rather childishly delighted that the graph used to illustrate some of the results (below top) looks remarkably like the one I’ve been using for years when I talk about diversity and gender (below bottom). 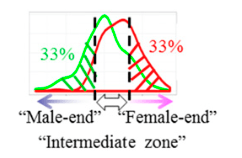 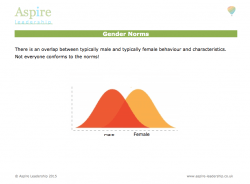 What both imply is that some women will display behaviours and characteristics that are more typically considered to be male-end than some men, and vice versa.

My husband and I are like that. He loves cooking, doesn’t mind ironing and hates DIY. The power tools are mine and I love to wield them but don’t ask me to iron anything! And I’m the one that does the map reading if we want to get anywhere.

But why does any of this matter?

Back in the 90’s I had a discussion with Alan Pease just before he published his bestseller ‘Why Men Don’t Listen and Women Can’t Read Maps’. In his book he has a set of tests that they give to potential helicopter pilots. Alan said he’d asked 30 women to do the tests and that none of them could. I said “You haven’t asked the right women – give them here!”

I then did the tests quicker than any man had done them and earned a place in his book (you’ll find my name just under Desmond Morris in the acknowledgements).

The danger with the ‘apple-banana’ approach is that some people use it as evidence to say women aren’t built to be helicopter pilots, so we shouldn’t have female helicopter pilots and women should stop making themselves miserable by trying.

The danger with the ‘we’re all apples’ approach is that we adopt a one size fits all approach to education and workplace treatment and that some people will say ‘If all our brains are the same women should stop bleating about equality in the workplace. You haven’t made it because you’re not good enough’.

The fact is there are some gender differences in the way our brains work – either because of nature or nurture – and they need to be addressed (particularly the nurture ones!) in order to achieve true equality of opportunity.

For example, when learning maths it helps most girls to learn more effectively if they can ‘talk it through’ – tapping into the language bit of the brain – one of the known regions where there is a gender variation.

At the end of the day, if you’re a woman who wants to be a helicopter pilot and you have the ability to do so, nothing should hold you back. If you’re a man that loves to care for people and you want to be a nurse, you should have the support you need to get there.

No outdated ideas of gender roles or brain construction should stand in the way of treating people as individuals – that’s where the research scientists, the Guardian writer and I all agree.

Bronia is an energetic and intelligent trainer and coach with a strong business background, empathetic style and lively sense of humour.