For a supposedly enlightened generation, gender employment bias still runs rife among many employment sectors, which leads me to the question:

If we want our daughters to succeed in male dominated industries, should we be giving them gender-neutral names?

In 1999 American Scientists, Rhea E. Steinpreis, Katie A. Anders, and Dawn Ritzke, conducted a study to determine whether employers were more biased towards hiring men over equally qualified women. They created two versions of a CV which were identical aside from the name on top; one being for Dr. Brian Miller and the other being for Dr. Karen Miller.

The researchers asked over 100 university psychologists to rate the CVs and found, rather disturbingly, that around 3 quarters of the psychologists thought Brian was hireable, whereas just under half the participants thought the same about Karen. 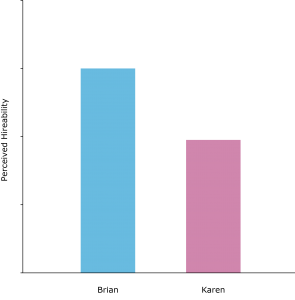 This study is now 21 years old and, while there have been more recent studies with similar findings, we can’t be sure what the result of the same experiment would be today. However, when you consider that this study took place 27 years after the Equal Employment Opportunity Act in the US, and 24 years after the Sex Discrimination Act in the UK, it does indicate that systemic prejudice cannot easily be eradicated by the change of a law and that, at best, these changes take a long time to manifest.

It is no wonder that Cordelia Fine, in her book Delusions of Gender, postulates that we are living in:

In similar studies with real employers, subjects were questioned as to their reasoning behind favouring male applicants over equally skilled female applicants. It seems that rather than stating gender as their reason, they are unaware of their gender-employment bias (it is an unconscious bias), and tend to give reasons like lack of experience, or inadequate education.

It seems the average employer subconsciously widens the goalposts for male applicants. It’s also worth noting that the employers and the psychologists from the first study were not just male. Males and females alike show unconscious gender-employment bias towards the hiring of men in male-dominated fields.

So this brings me back to my opening question. It does seem that a woman with a gender-neutral name (like Alex) will have an easier time getting her foot in the door when it comes to getting a job in a male dominated sector. Even if it is just the first step on a very rickety ladder.

Beyond Gender Employment Bias (further up the rickety ladder)

There are many studies showing the negative effects of gender stereotyping, or a feeling of ‘not belonging’, on a female worker’s confidence and performance, as well as things like the perceived salience of gender affecting performance. Studies have also indicated that more subtle sexism has a stronger negative affect than if it is more blatant. This suggests it could be even harder for women trying to succeed in male-dominated fields now than it was when sexism was more commonly upfront.

There are studies that show that both genders are more likely to put up with aggressive management strategies from men than they are from women, and that likability plays a big part in being promoted to top management positions. This causes women to be passed over in favour of men with identical ruthless management styles.

There is no denying that gender equality in business has come a long way since the 60s, but we are far from out of the woods yet.

At Aspire we endeavour to help women navigate the challenges of the male dominated workplaces with our Women In Management course – available online.

Kitty is a trainer at Aspire specialising in presentation skills as well as being our in-house graphic designer. She has a small dog called Nacho, is a member of Mensa, and is currently completeing her MSc in Psychology.